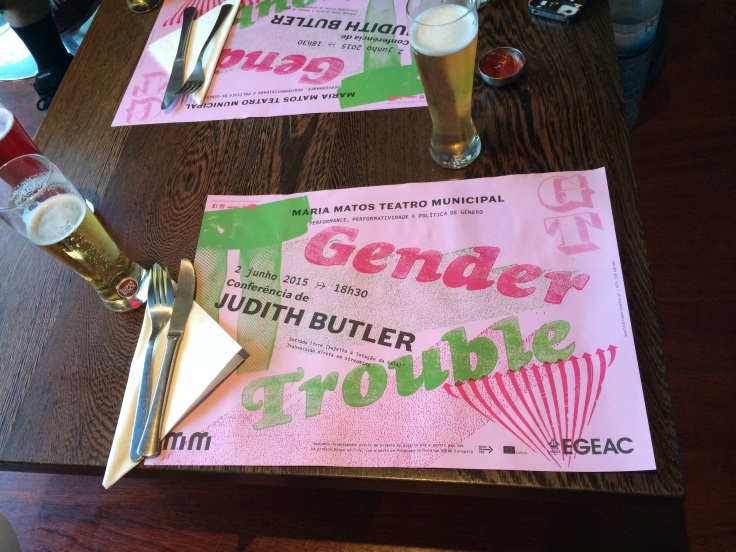 So I’m just back from Lisbon where I attended one weekend in performance and gender festival called Gender Trouble, commemorating the 25 year anniversary of Judith Butler’s influential and controversial book of the same name.

I can’t say I’ve read the whole thing or understood everything in it, but Butler’s talk on Tuesday night was inspiring and thrilling as she talked about the violence that strict gender norms can inspire and also the problems of believing in natural or “essential” ideas of gender. Butler is a philosopher but the ideas help to think about what actions can and must take place to ensure that people can pursue a “liveable” existence and to even flourish rather than be punished for being who they feel themselves to be.

Arguably Butler is best known for her often misinterpreted concept of gender as a social performance that is continually reiterated rather than being the expression of a prior reality.

Here’s a link to a quick, pared down explanation from Butler about this concept: Your Behaviour Creates Your Gender

I know it’s geeky, but myself and Rosana Cade got a selfie with Butler and were very pleased to have Gertrude Stein and her partner Alice B Toklas in the background…

I am a live artist and theatre maker based in Glasgow. I am a artistic director of Fish & Game and one half of Cade & MacAskill and The Polar Bears.